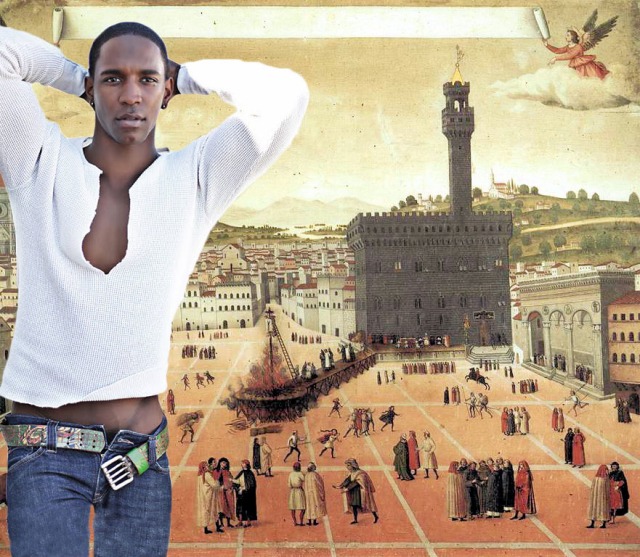 This wasn’t my first time, not even in Florence, but it’s my shtick, if you will. I’ve taken up position on the steps of the Loggia della Signoria, squatting between the statues of Cellini’s Perseus and Fedi’s Rape of the Polyxena. I’m not a prostitute, but I’m a slut with a boy friend who’s a math genius and who’s always busy with his “results”—meaning he’s raising his head with an otherworldly expression on his face when you ask him what he’s doing and then he’s going back to an “open problem” that he found in a yellow, hard-cover math book and solving that problem rather than sucking your dick.

We’ve been through the math routine this morning, and I’ve put on the Abercrombie & Fitch outfit we bought yesterday on the Via de’ Tornabuoni and which looks exactly like the outfit that I bought the day before. I’m also wearing my imitation-imitation watch, meaning it looks like Swatch but is made from real ivory with a bio-certificate attached to it. I don’t care about designer clothes, but it’s a go-to part of my scheme because you really don’t want to look like a hustler when you’re squatting between Perseus and Polyxena on the steps of the Loggia della Signoria waiting for things to come.

I mean, I’m not. Waiting. That would be the last impression you’d want to make. You sit there absorbed by your iPhone, sending SMSes to yourself or studying the tourist guide—a useful activity on account of the fact that’s a bit chancy what I’m doing. Eventually I’ll follow a guy to his hotel—he’s “invited” you to his room on some pretext and you’ve accepted his invitation on some pretext—and then you really don’t want to end up in the wrong hotel. There’s a perfect correlation between the wrong guy and the wrong hotel. That doesn’t mean that “exclusive” guest houses will provide you with an exclusive experience, but real-exclusive is hard to fake, so there’s some insurance value to the choice of the Sina Villa Medici at twelve hundred bucks for a single room per night.

Plus—it’s not like you plump down on the steps of the Loggia and the next moment David Beckham shows up and carries you off to the Villa Medici like you’re the sex-starved victim of an Apennine earth quake. No—you’re somehow idling loggia-wise—squatting is best, there are some vibes to it that are hard to explain, something to do with your youthfulness—and for the first couple of minutes nobody’s taking notice. You could be Madonna or Justin Bieber, nobody’s paying attention to you—unless, that is, you’ve already put on a show, like crossing the Piazza della Signoria from the Gucci Museum, singing La Traviata to your ear phones, or walking three times around Cosimo’s equestrian statue, or feeding the cab horses with illicit sugar and turning down unambiguous offers by the cabbies—eyes following you by now—and then you squat between Cellini and Fedi and they’re all over you, shouting out the name of their hotel like in some reverse slave auction and the winner carries you off. I’ve met guys that do it like this, but it’s not my thing.

I try to blend in. I send an SMS to myself or to one of my former tricks—sounds funny, I know, but I always get their number and a picture and keep lists. I even stay in touch with my tricks, sending them silly messages and acting as if one fine day I’ll write a memoir about them and win an important literary award.

I’ve just send a message to Tony from Honolulu with a pic of the tiny prick of the fake David statue to the right of the Palazzo Vecchio entrance.

It’s time to raise my eyes and take stock of the goings-on nearby. There are roughly four hundred people scattered across the piazza, half of them tourists (sneakers, flipflops), one quarter Italian (leather shoes, heels), and the remainder either expat or undefined.

Undefined is what we need; we have a preference for young billionaires with a sense of humor and time on their hands. None of them is in evidence, regrettably, so we take more pictures. We snap the horse cabs and a crazed woman dressed up like Mae West on platform heels and Poseidon, of course, the main statue of the fountain to the left of the Palazzo Vecchio. A black guy has materialized next to the fountain and is taking pictures of the Loggia, meaning he’s taking pictures of me taking pictures of him taking pictures of me. It would be a first as a come-on for me, and the fun part is in the distant reciprocity—who is to say who is coming on to whom? Whether the guy is actually aware of me remains to be seen, the Loggia comprises a dozen statues and forty other sightseers as we speak, but I’m aware of him, unmistakably.

He’s the Kenyan type, long and stalky, ebony-black, clad in a half-open Hawaii shirt that leaves nothing to the imagination, shiny flat pecs, wide strong shoulders, the torso funneling down to the small of his back along four effortless abdominal muscles. He has a beautiful, round neck, infinite lips, infinite teeth, and wears stylish grey pants, widely cut, much wider that would be the fashion on the Via de’ Tornabuoni. I know about these pants: it’s not fashion; guys wear them to hide their third leg.

I’ve stopped snapping, he’s stopped snapping. With these folks you never know, especially rich kids from Africa, they’re all queer or none of them are, and they’re either not familiar with the code of gay cruisin’ or loath to use it. He will turn around and pursue his journey from the Villa Medici to the next must-see attraction, the Doumo, Florence’s cathedral. And that is what he does. 364 plus 0 is still 364, what the heck.

Hold on. I do get up, and he has turned around and taken a few more snaps while playing with the button of his digital zoom.

Michael Ampersant lives in Southern France and writes laconic-erotic prose. His first novel, GREEN EYES, was a finalist in the Lambda Literary Awards last year. A sequel, THIS IS HEAVEN, is forthcoming.